EXCLUSIVE MEMBER SCREENING OF 'FATHER OF FLIES' _ WE ARE OPENING! _ WE ARE HIRING _

Go back to all news

Runway Gallery artist, GrAzie was born in New Zealand. After graduating from art school she went travelling, before settling in London. When she first began painting and exhibiting she promoted her work by pasting her designs up on the walls of the famous East London street, Brick Lane. Coining herself as Pineapple Girl.

Her painting style blends inspiration from fashion, music and pop culture and is therefore easily recognised by her portrayal of popular imagery and icons through a faceless painting style. She often references many of her favourite artists in her work, combining art history with contemporary figures and settings. 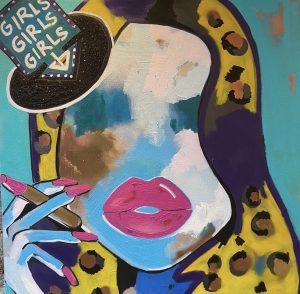 
Influences and inspirations include a broad range of subjects; from musical legends like Bowie, Prince and Fleetwood Mac; to geographical locations like her hometown of New Zealand and favourite city, New York; to the more obvious inspirational figures like fellow artists Keith Haring, Tom Wessellman, Basquiat and Joyce Pensato.

GrAzie’s style inspiration comes largely from Kate Moss (who is also the subject of a couple of GrAzie’s better known original artworks) and her personal style of inner Boho/Rock Chick also plays a big part in her artworks - she likes to mix up her wardrobe by collecting vintage pieces and high street staples, whilst maintaining a self-confessed obsession with leopard print.

Before the lockdowns ensued, you could find this artist enjoying the energetic streets of Soho - more than likely with a Margarita in hand and in the company of her recording studio partner who also happens to work in the West End.

Even though lockdown has been tough on everyone world-wide, this is one artist who won’t let the pandemic keep her down - she says: “let’s be honest, artists self-isolate most of the time anyway! So I have tried to keep myself positive and use this time wisely, predominantly to produce more artwork.”

GrAzie has been one of the top-selling artists with her representation Runway Gallery and continues to produce bright, colourful and endorphin-enhancing canvases and limited edition prints. This lady has some strong future aspirations including Scope Miami and a solo show in New York, so… watch this space!
COVID-19 Century At Home Apply for Membership